We Will Kill All American Hostages: Haitian Gang Threatens to Kill Kidnapped Missionaries

We Will Kill All American Hostages: Haitian Gang Threatens to Kill Kidnapped Missionaries 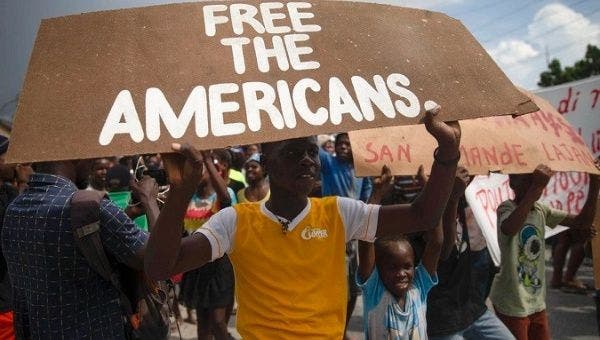 A Haitian militia group accused of kidnapping American missionaries has threatened to kill them if authorities ignore its demands. A video doing rounds on social media from Wednesday shows the group’s leader, Wilson Joseph, threatening to shoot them unless they receive a ransom of $17 million. This comes amidst a round of lawlessness, an economic crisis, fuel shortage, and growing desperation in Haiti.

The 400 Mawozo Gang controls the Ganthier commune, which is in the suburb of Port-au-Prince. The abducted missionaries in Haiti have been working in the commune until their kidnapping last Saturday. The country’s justice minister has confirmed the ransom demands of $1 million per hostage, with the U.S State Department saying that the video appears to be legitimate.

The unruly 400 Mawozo Gang kidnapped the crew from the Christian Aid Ministries that was providing a needful population with essential services. The crew distributed medicine to clinics and helped with a home rebuilding project for victims of the devastating August earthquake that shook the country. However, that was not enough as the militias disregarded their mission and service and abducted them for ransom.

The non-profit Ohio-based organization, on Thursday confirmed that they knew of the video circulating on Facebook. However, it did not comment about the issue, citing fears that any comments may jeopardize the work of the rescue team. The organization’s leadership had this to say:

“We will not comment on the video until those directly involved in obtaining the release of the hostages have determined that comments will not jeopardize the safety and well-being of our staff and family members.”

Family of Hostages Asks for Prayers

The hostages’ families have asked for prayers on behalf of their loved ones. They asked this in a statement for prayers as they hope this would help to bring their family members back home safely. They also said that they were praying for the militia group members.

The organization has said that the hostages are from Mennonite, Amish, and several other Anabaptist communities in Ohio, Wisconsin, Tennessee, Pennsylvania, Ontario, Oregon, and Michigan. They include five children aged between 8 months to 15 years and 12 adults.

Poorest Country in the Western Hemisphere

Haiti has also experienced one of the worst Haiti demonstrations. The protestors are against rising violence, a deteriorating economy, and “the government’s inability to have a grip on rising kidnappings.”

The U.S State department has weighed on the situation too. The department has said that the FBI is working with it to help with the safe release of the hostages, adding that their focus is the missionaries’ safety.

Chege is a passionate presenter and writer who loves to write about anything and everything (well, except technical, medical, and engineering stuff...laughing). Follow him on Facebook at facebook.com/chegewchege

©Chania FM, Kenya - All rights reserved | Made by Ndovucloud